ADEN (named for the Armament Development Establishment and Enfield where it was originally designed and built) was a direct development of the WWII German Mauser MG 213. The ADEN entered Service in 1954 and was fitted to the Hawker Hunter. END_OF_DOCUMENT_TOKEN_TO_BE_REPLACED

The Bomb Stores Site has two access roads with seven concrete hard standings in between and earth banks separating each hard standings or bays. These bays were used to store the bombs which were placed on wooden frames. The earth banks that separated each bay gave a degree of isolation should there be an accident and these are still visible. END_OF_DOCUMENT_TOKEN_TO_BE_REPLACED 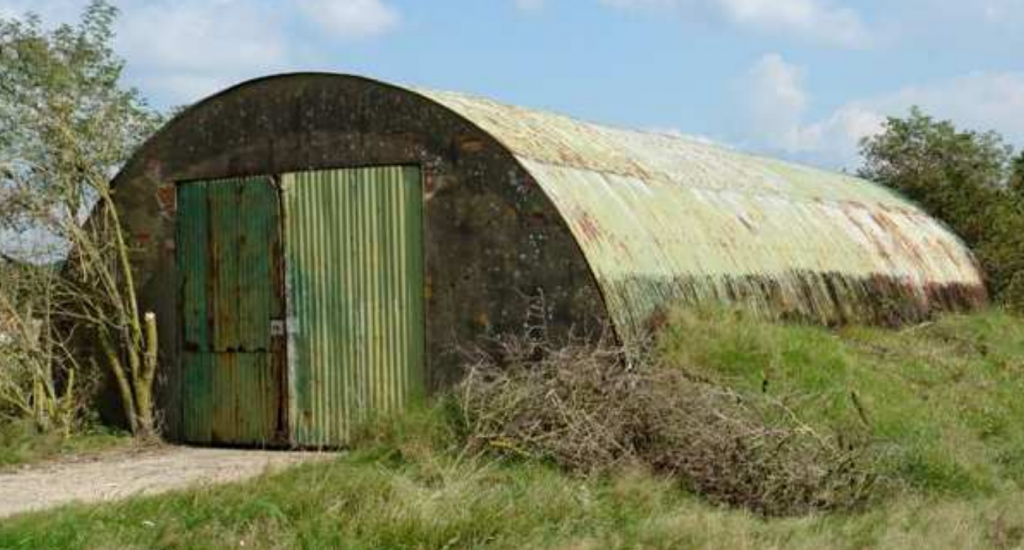 16ft span Nissen Hut located within the WWII Bomb Stores Site. A concrete roadway splits and enters the structure to allow the bomb ladened trolleys to be fused ready for deployment before being taken to the aircraft. 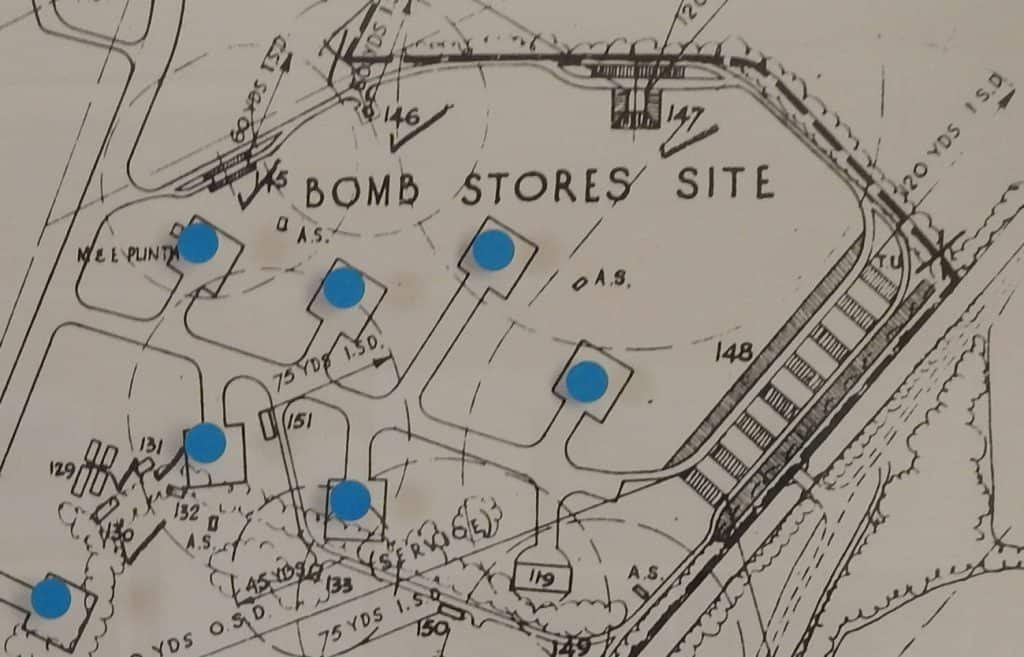 The land to build Dunsfold Aerodrome was requisitioned in 1942 and work started almost immediately, mostly undertaken by the Royal Canadian Engineers. It was one of the very few airfields they built in England (4). Set a target by their commanding General, the Canadian sappers completed construction of the aerodrome in 18 weeks, against a quote of 18 months by civilian contractors on behalf of the British War Office. The Canadians did, however, have the advantage of large American earth-moving equipment

The 2nd Battalion Royal Canadian Engineers, 2nd Road Construction Company & the Canadian Forestry Corps used explosives and some of the heavy machinery supplied from the USA under the lease lend arrangements. Tree stumps were blasted and from May 27th concrete was being poured in two shifts 18 hours a day.

One of the obstacles encountered in the construction of the 45ft wide 3 mile perimeter road was Broadmeads Cottage. It straddled the route to be taken and a swift demolition was required to keep construction within the tight timeframe. Sergeant Fred Kreugar realised special skills were required to deal with the building so ordered Sergeant Whidden to deal with the issue.

As well as moving earth and buildings, the main Guildford-Horsham road had to be diverted. The job was complete in 20 weeks. (6)

By the control tower, there is a plinth inscribed:

“This aerodrome was built by the Royal Canadian Engineers assisted by Canadian Forestry Corps, Royal Canadian Army Service Corps and Ordnance Corps, 1942. It was handed over for the use of the RCAF in October 1942.”

Dunsfold was one of only two airfields in Britain to be granted to the Royal Canadian Air Force and, as such, was titled RCAF Dunsfold. This was in exchange for the many training airfields that the Royal Air Force was permitted to establish in Canada.

Dispersals: 38 100 feet (30m) “frying pans”: on the south and east of the site.  “Dispersals” were parking areas for aircraft and distributed to minimise damage in the event of an attack. They could accommodate 50 aircraft.

Towards May 1942  the sappers’ lines began to agitate with rumours of a new job, a large job, an airport, no less. As the rumours originated with the sappers, credence was promptly given to them by the officers and sergeants, and we prepared for the move. Dunsfold!!

When we arrived there, it consisted of acres of beautiful crop and pasture land, broken at intervals by groves of staunch blue and red oak trees. It was one of the grandest pastoral scenes in the whole of England. With the Forestry Corps, R.CA.S.C, 2nd Road.  Construction Cby details who were attached to us, the Battalion descended on the areas natural loveliness like a swarm of locusts. Regiments of trees disappeared in a dav at the behest of the Foresters, carry-alls moved mountains of earth, mechanical ditchers dug deep to provide drainage.  Fleets of trucks hauled “hogging” from Ewhurst and gravel from Hungry Hill. Fourteen ton capacity trailers towed bulk cement from Shoreham. For eighteen hours a day there was a pandemonium of sound and movement, and during the other six hours the camp’s rest was uneasy, as, during the night, vague groups of men wandered about ensuring that the machinery would be in order to resume its labour the following day. Gradually the runways were levelled off and finegraded to the point where concrete could be poured. A huge double barrelled cement mixer was put to work, and competition between shifts which had previously been very keen, now reached fever point. For some days the mixer was allowed to work as it’s manufacturers intended it should, squatting at the side of the strip to be poured, and depositing the wet cement in any place desired by means of a boom and a bucket, which were soon found to be the weakest part of the machine’s construction and subject to frequent break- downs. Within a week the boom and bucket had been abolished, the mixer placed squarely in the centre of the strip to be poured, and the concrete allowed to fall out of it into heaps from whence it was industriously shovelled into its required position by a group of sappers whose enthusiasm was beyond praise.

Of the central mixing plant, the saw mill, the drainage crews, the work of transport and Q.M. etc., there is not room here for more than passing notice, but, when in September, the first ‘plane landed, and in October, when the Airport was officially opened and handed over to the Air Force by General McNaughton, the Battalion was rightly proud. A difficult job had been com-pleted in record time. It had thereby justified itself, and felt confident of being able to give a creditable account of itself in any work the future might hold.

Dunsfold too holds memories of a lighter type, as when a certain red-headed A.T.S., decided she was going to make her residence in the camp. The R.S.M. decided not and the whole camp held its breath whilst she defied him and passed four nights quite pleasantly in certain tents the morning after the fourth night however, she was caught and hauled off to “pokey”, much to the indignation of several individuals.

It was here too that the famous and notorious chicken incident occured.  Close to the camp resided a widow with two daughters, whose livelihood, to a great extent, depended upon the well being, happiness and egg producing capacity of some half a dozen hens. One dread night all six of them disappeared. The local constabulary was hot on the trail next morning, and, noses close to earth, sniffed their way along a morbid trail of blood and feathers into the middle of our camp. Here the trail ended. The incriminating facts were reported to the Colonel, and he, in his wisdom, ruled that unless the birds were returned to their rightful owner that very night, the whole camp would be C.B’d for one month. The next morning the widow found herself to be the somewhat perplexed owner of 186 chickens.

Then there was the night of the fire in the ammunition tent, when a certain C.S.M. awakened to the sound of exploding bullets and decided that Hitler himself was leading a personal invasion of Dunsfold. He leaped from his tent clothed in underwear and a bandoleer, his rifle at the “on guard” and shouting,

“Invasion”, as only a C.S.M. could. Then there were the dances in the Auxiliary Services blister hut and what dances. Dances at which, after they were over, lovelorn sappers endeavoured to smuggle themselves aboard the trucks taking the girls back to Guildford.