With Sea Harrier jump-jets landing on the carrier Hermes in Portsmouth, Frederiksen, who had been testing aircraft at Boscombe Down, inveigled his way aboard as an additional pilot in 800 Naval Air Squadron, under the command of Lt Cdr Andy Auld. A month later he was in the thick of war.

On May 1 Hermes entered the Total Exclusion Zone which Britain had declared around the Falklands, and Frederiksen led a bombing strike by three Harriers on the airfield at Goose Green. After taking his aircraft at wave-top height down the Falklands Sound, Frederiksen flew low over a range of hills and, completely surprising the air defences, destroyed one enemy aircraft as it was taxiing and damaged two others.

Over the next few weeks Frederiksen flew many ground attack, air defence and photographic missions, but May 21 was his busiest day of war.

The British landings in San Carlos Water provoked a strong reaction by the Argentine air force, and during fierce aerial combat an estimated nine enemy aircraft were shot down. In mid-afternoon Frederiksen, leading a flight of two Sea Harriers with sub-lieutenant Andy George as his wingman, spotted a flight of four Dagger ground attack aircraft approaching the Task Force, and closing behind the last of these, at low level and under a layer of cloud, he launched a Sidewinder air-to-air missile to bring down Lieutenant Hector Luna’s jet. He then sprayed the leader of the enemy formation with cannon fire. Luna ejected at low level and was lucky to land on the side of a mountain, from where he was rescued.

The next day Frederiksen, now flying with lieutenant Mike Hale, strafed the patrol vessel Rio Iguazu, which was carrying field guns and ammunition to reinforce the Argentine defences, driving it ashore among the kelp. He was mentioned in despatches.

Rodney Vincent Frederiksen was born in South Shields on April 7 1947. His father was a wartime wireless officer in the Danish merchant navy who moved to England. Rodney was educated at St Aidan’s, joined the Royal Navy in 1966, and began his operational career as a Sea Vixen pilot in 893 Naval Air Squadron in Hermes in 1970.

He flew the Phantom jet fighter-bomber in 899 NAS from the carrier Eagle in the early 1970s, attended the central flying school at RAF Little Rissington in 1973, and subsequently taught flying. In 1977 Frederiksen was selected for No 36 Fixed Wing Course at the ETPS and for the next five years, until the Falklands War broke out, he was a test pilot at Boscombe Down. 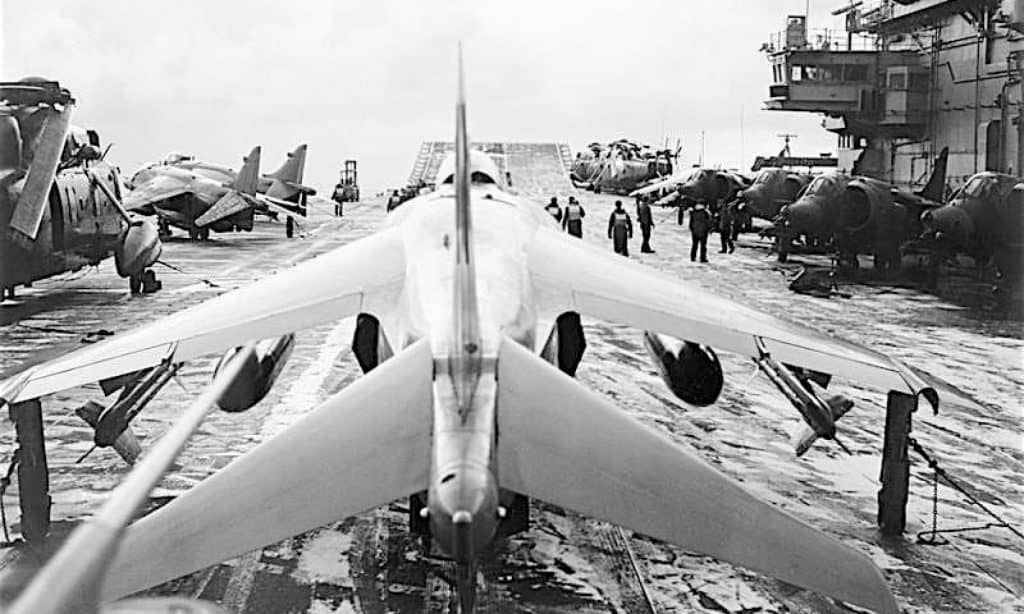 After the Falklands War Frederiksen returned to Boscombe Down, before commanding 800 NAS, flying from the carrier Illustrious, until 1988. He was once reprimanded after faulty navigation equipment took him close to Murmansk, a scrape which earned him the nickname: “Red Fred”.

In 1988 Frederiksen passed the naval staff course, but he hated the desk-bound environment and the following year joined BAE. There he test-flew improved marks of Harrier and in 1994 was awarded the Queen’s Commendation for Valuable Service in the Air.

Between 1995 and 1997 he was based in INS Dabolim, Goa, where he helped train Indian naval pilots to fly their Harriers. Later he also trained Indonesian pilots to fly the Hawk, before his last job in 2003, where he taught on the simulator at 208 Squadron at RAF Valley, Wales.

Frederiksen’s airmanship was professional, and he was a popular leader who commanded respect and was “as fun to fly with as to crash with in the bar”. He showed concern for his men and passed his love of flying on to all his students.

Rodney Frederiksen, who died on September 27, 2009, married Jill Coker in 1986. The couple separated and she survives him with their three daughters.