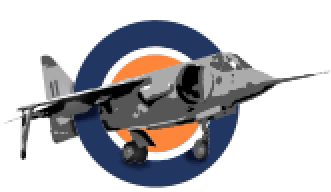 Hugh Merewether FRAeS   (1924-2006)
Merewether was appointed Deputy Chief Test Pilot at Dunsfold in 1956. He was the second pilot to fly the P.1127. In 1963, he was awarded the Queen’s Commendation for Valuable Services in the Air for crash landing the P.1127 rather than ejecting and thereby saving the machine to be examined to locate the fault. He became Chief Test Pilot in 1967.

Hugh Merewether, who has died aged 82, was one of the British test pilots who pioneered the vertical and short take-off and landing (VSTOL) techniques that led to the production of one of the RAF’s most successful and enduring combat aircraft, the Harrier.
During 1957 the Bristol Aero Engine Company was developing a vectored thrust engine, later known as the Pegasus, which appeared to meet the emerging military need for a simple VSTOL tactical fighter capable of operating from unprepared areas. The Hawker Aircraft Company designed an aircraft, the experimental P.1127 powered by the Bristol engine, to test the new concept.
Merewether was the deputy chief test pilot at Hawker’s airfield at Dunsfold when he joined the chief test pilot, Bill Bedford, in developing the techniques of vertical take off in the P.1127.
Bedford made the first hovering flight in the prototype P.1127 on October 21 1960, and three days later Merewether completed the second flight. Over the next two years the two pilots shared the experimental test-flying task. The P.1127 had its share of accidents. On October 30 1962 Merewether was flying at 3,000 ft when the engine suffered a catastrophic failure and caught fire. Rather than eject, he managed to crash-land at RAF Tangmere, thus allowing the engineers to investigate the failure fully. He was awarded a Queen’s Commendation for Valuable Services in the Air; the Guild of Air Pilots and Navigators awarded him the Derry and Richards Memorial Medal (1963).

One Reply to “Hugh Merewether FRAeS”